I just bought Rogaine for Women. I'm thirty one, talk about scary. I was told by a Walmart hairdresser well over a year ago, as she cut my hair, that my hair was thinning....and I guess I should have heeded her warning. I now am constantly checking to make sure it is laying just right, so as to cover any patches that seem certainly thin. The directions say to consult a doctor....but I don't have health insurance and pretty much only see a doctor when I feel like I'm about to die ( last doctor visit involved a full blown kidney infection, morphine, immense pain, and being told if I had caught this while it was a simple UTI I would not have felt as though I might die or that I could very well suffer brain damage beacuse my temperature was so high for so long that I had to lay shivering half naked on a hospital bed for six hours....or have needed to be hospitalized at all).

So baldnesss? Stress...probably....age...maybe...but fifteen bucks on top of the vitamins and inner peace I'm trying to achieve to prevent these problems to begin with....hopefully will turn my thinning hair back to the unruly thick locks I once had. Fingers crossed.
Posted by Strizz 1 comment:

When my friends haven't heard from me in a week....
When I'm not there for the things I should have been....
When they just show up at my door out of the blue because HELLO IT'S BEEN A WEEK! Where have I been and what is going on and why haven't I aswered my phone!.....

I'm left feeling more guilty than I already was for not being there....
I feel loved because they really care.....
I feel even more guilty for not being there.....
I feel like I need to be a better friend.....
I feel grateful that I have the friends I have.....
I hope that I can show them that I care as well.....
And then I think maybe I should warn them I'm the kind of person who will just fall off the map sometimes, the kind of friend who will always love you but may not answer the phone for a month....most times I won't even answer the door if I'm not expecting anyone.....
Posted by Strizz No comments:

Just the other day I was talking with a friend of mine from way back in the end. We met due to some sort of middle school rebellion. Me in detention and her forced to clean desks during detention. Any way...we were talking and we got onto the subject of children and the fact that my oldest is just now entering that stage where you do pretty harmless things that are pretty idiotic. The things that we all do because we think we know everything, can get away with anything, and at the end of the day will probably be looked back upon with fondness. I mean really how serious is the eyeliner battle going to seem when she's thirty?


So in this conversation we joke about how I just may be cursed with kids who put me through what I put my parents through. She says how she never understood why I always said that my parents were strict or mean because she just loved them!! The few times they met she thought my Dad was hilarious and my Mom so sweet. She just didn't see what I had been saying. I think that's because my Dad is funny, and my Mom is sweet. They are cool and fun and great....but that doesn't mean my life was. That doesn't mean that behind all that real life wasn't happening.That doesn't mean they are bad people but I wasn't standing all alone in that mess. I hadn't  found myself thrust into adolescence with the best tools to thrive and been simply unable to utilize them. I wasn't just a troublemaker, a bad seed.

I was frozen by this conversation. Frozen because even now, years and years later, I still couldn't summon the courage to say what my life was really like. I couldn't tell the truth. So I half heartedly agreed with her and managed a chuckle or two. I was left feeling very disappointed in myself, our conversation, and secretly wishing sometimes I didn't have friends I'd known from way back in the end.
Posted by Strizz No comments: 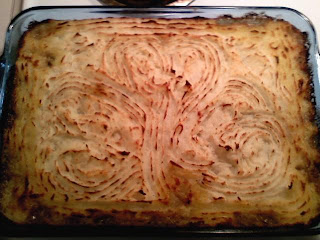 I made shepherds pie for dinner tonight. The kids were in no way placated by the fact that it is a traditional Irish dinner, no matter how gung-ho on the day they were. My youngest made herself a turkey and ham sandwhich. An hour wasted. But I did take some joy in forming a shamrock (of sorts) in the potatoes. The evening will be over following my long hot shower, cupcakes with green sprinkles, and the conclusion of the movie Splash! starring Tom Hanks.
Posted by Strizz No comments:

And the Britney Song Was On

I was about to start writing about how I woke up not feeling well and the clock on my phone said 3:45 while the computer said 4:45 and how confused I was by it all because either way I was up before 5 am trying to futz with electronics. Then I randomly chose a title. I thought some music sounded good. I usually listen to a CD or the radio in the morning anyway. Putting the phrase "new music" into the Youtube search bar gave me several options, inlcluding the Lady Gaga/Beyonce colab---which I'm not really quite sure if I want to see that sucker again. Then  I saw this.

That album has the ability to transform me to  very specific time in my life, in the not so distant past. It brings me back to that apartment. Laying on the couch laughing and listening, debating and loving every second I was living. I can still see the pattern of that couch, feel the texture, where everything was placed...even the random feathers that always were escaping the bedding. There was so much angst and uncertaintly but it was all so very exciting and shiny. I love the fact that any song I hear from it takes me back there again.  That is one of the best albums and I have listened to it so many times when the first radio single came out all I could think was "UGH! That isn't even the best song on the album!". Go buy it. Listen to it 37,000 times and then listen to it again. Play it in the car. Play it full blast in the house while you do some cleaning. Your kids probably already know the words to Sex on Fire anyway.
Posted by Strizz No comments:

I am totally exhausted, as usual...and I even got nap in today. I'm looking at a seven hour day tomorrow at the field with all three kids having games. YAY OPENING DAY!!! Better than sitting home for sure. I just hope the weather holds and there are some cool parents I can chat with. The kids are getting more and more excited as we get the finishing touches done on uniforms and pick up the last few things they need. Their excitement is contagious, and I love it! It makes the six practises a week worth it.

My boyfriend currently lives six hours away so its not like I can have him to snuggle with in the stands. I miss having him around.  I miss the goofball things he does to make me laugh. I miss having my coffee brought to me, after he has shut the alarm off and let me sleep an extra ten minutes. I miss having him in the kitchen stirring this and tasting that until he's gotten in the way enough times I banish him to the living room until dinner is ready. I miss so many things. I miss passionate kisses and multiple orgasms. Mostly I miss his smell and how soft his skin is, how he holds me or I hold him. I miss knowing at the end of the day I'll be with him.
Posted by Strizz No comments:

I was thinking earlier this post should be about Stove Top Stuffing. I don't buy it very often, mostly because I can honestly eat the whole box to myself and even when I'm not trying to be all healthy and stuff I know a box of Stove Top isn't quite what I should be eating (nevermind that half gallon of ice cream I would have for dessert) but every time I do ( or did buy it/and/or eat the whole box) I think "Man this shit is AWESOME!!!".  Well, I grilled some chicken tonight and made some Stove Top and the kids were lucky they even got the generous first helping much less seconds. Stove Top is as easy, or easier, to make than Ramen Noodles. You really dont have to do shit after the water boils but put the crumbs in and shut the burner off. You can over cook Ramen. I've done it. Sorry ex-brother in law who had to eat the nasty over cooked chicken Ramen. HAHAHAHAHA. You sucked anyway....
Posted by Strizz No comments:

This  creeped me out. Big time.
Posted by Strizz 1 comment:

Love never dies a natural death. It dies because we don't know how to replenish its source. It dies of blindness and errors and betrayals. It dies of illness and wounds; it dies of weariness, of withering, of tarnishing.

I think that's pretty true. And somewhat depressing. I totally believe in real love. I see couples all the time, young and old, who seem to be the picture of happy. They seem to really enjoy each other. But I wonder how many of those couples leave a party, the envy of everyone....and as soon as the car doors close a seething brood envelops them. They sit in the thick silence the entire way home. I've looked up to people in the past only to find that my idea of them, and their perfect presentation of them,  was nothing close to the reality. It really fractured my belief in marriage and truth. I felt like if it can happen to them, well then what hope is there for the rest of us? But I still totally believe in real love.
Posted by Strizz No comments: 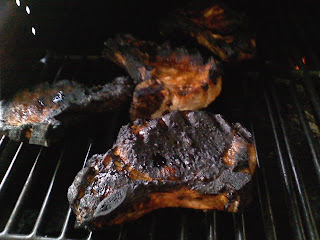 I just burned the crap out of dinner. (Ok, well only one side of dinner). And the grill wasn't even set on high. All while I am sitting five feet from the grill. The neighbors are all thinking YUM WHATS FOR DINNER??? And I'm all like HELL IF I KNOW!!
Posted by Strizz No comments: